Travis and Jaimee have gained international success performing and teaching across the United States as well as Italy, England, Switzerland, Spain, France, Hong Kong, mainland China, Ecuador and Peru. They were also invited as guest performers on the luxury cruise line, Crystal Cruises as well as repeatedly performing live with the Philadelphia Orchestra.

Due to their immediate success as professionals, Travis and Jaimee were invited to present their award winning solo in the Theatrical Arts Exhibition Championships at the world renowned British Open Championships held in Blackpool, England in 2012. 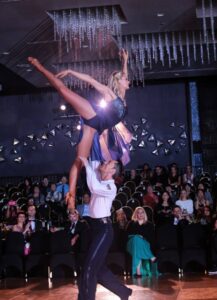 Travis is originally from Boise, Idaho where he began dancing in a once-a-week social ballroom dance class at the age of 14. He went on to attend Brigham Young University, graduating with a degree in Spanish and a minor in Ballroom Dance. While attending school he traveled the world as a member of their formation ballroom dance team. With the Latin team Travis placed 1st at the British Open Championships in Blackpool, England and is a four time U.S. Latin Formation team champion. He is also a two time U.S. Amateur Theatre Arts runner up and has trained and competed in International style Ballroom and Latin, and American style Rhythm and Smooth.

Jaimee is originally from Idaho Falls, Idaho where she began training in classical ballet at the age of 5. She trained exclusively with former principle dancers from the NYC ballet and Ballet West for 15 years. While in high school she began training and competing in International style Ballroom and Latin, and American style Rhythm and Smooth. She later attended Brigham Young University, graduating with a degree in Mathematics and a minor in Ballroom Dance. She was a member of their acclaimed formation ballroom dance team and placed 1st at the British Open Championships in Blackpool, England in 2010.